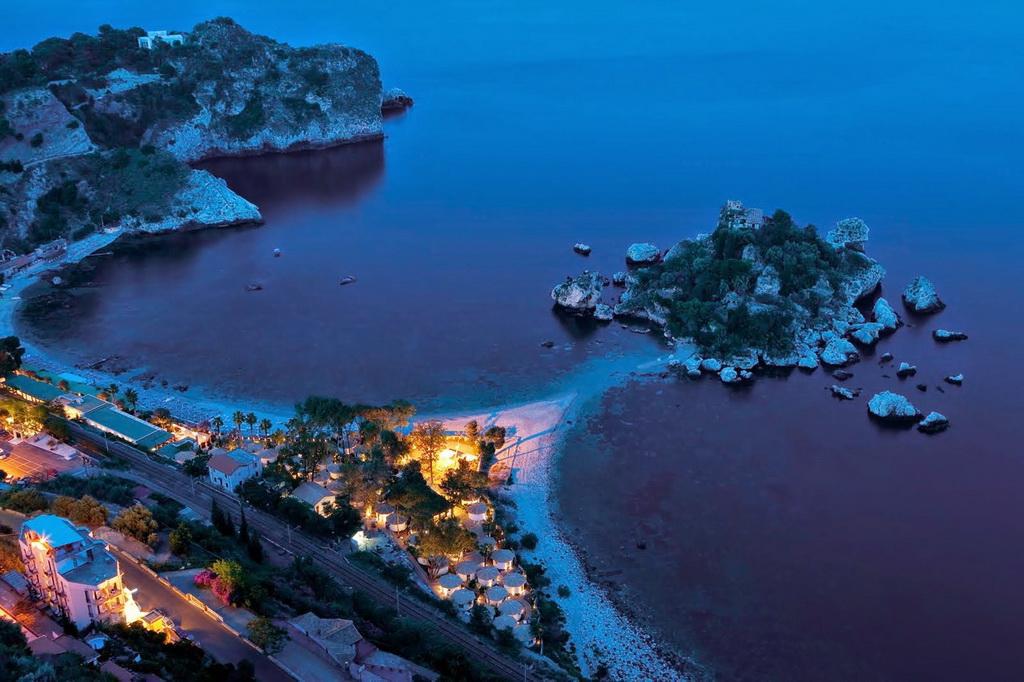 Looking for a hotel in Taormina? Choose from more than 0 boutique hotels and charming hotels

The name of the charming little town (10,000 inhabitants, 200m high) set on the east coast of Sicily between Messina and Catania has its origin in the “Tauros Mountain” near the present castle, where settlements of the Siculans probably date back to the 8th century B.C. In 392 B.C. the Greeks conquered the promontory, founded “Tauromenion” and built the famous theatre with its breath-taking panorama.
Sicily's most popular holiday resort is situated on a rocky terrace towering high above the Ionian Sea, with a spectacular view of Mount Etna and its snow-covered peak on the one side and the splendid coastlines of Sicily and and Calabria on the other.

Taormina features a large choice of hotels, restaurants, pubs and bars – ranging from country-style pizzerias to first class addresses - as well as elegant boutiques on “Corso Umberto”, the famous pedestrian district. The sea with long sand and shingle beaches, beautiful bays and the enchanting tiny islet “Isola Bella” can be reached in a couple of minutes by cableway (“funivia”) - leading down from the hill to Mazzarò.
Taormina’s panoramic position, its numerous historical sites, above all the superb Greek-Roman Theatre, the unique flair of the romantic medieval centre with innumerable narrow streets and flights of steps, the lush mediterranean vegetation and the mild winter climate… all this already attracted travellers of the upper classes, artists and intellectuals from all over Europe centuries ago.

When Johann Wolfgang von Goethe reached Taormina in 1787 on his journey in Sicily he was enraptured by the enchanting scenery. "On the right on two cliffs stand the castles, below stretches the city" - he wrote in his diary - "and although the buildings belong to a recent epoch one imagines that there were buildings on the same site even in ancient times. Then one observes the long sweep of Etna; the beach stretching to the left as far as Catania or Syracuse; the huge smoking mountain of fire enclosing the entire scene without in any way being frightening; the softening effect of the atmosphere which makes the mountain appear gentler and more distant than it actually is ".
On May 7 the same year, the great German traveller also admired the amphitheatre and as he rested on the upper steps acknowledged " that never had a theatre audience a similar sight before it".

Words written over 200 years ago. Today hardly anything has changed. The hidden corners, the atmosphere, the colours of Taormina enchant the modern wayfarer as much as they did Goethe.
Whatever the season, its irresistible fascination captures both those who seek a peaceful holiday in contact with nature and those who prefer action, excitement, meetings. Futhermore, the great international cultural events and performances, some of them taking place inside the magnificent ancient theatre, contribute towards making Taormina the best centre to know the rest of tourist Sicily.

Less international, but also worth a visit: the traditional “Festival of the Sicilian Carts” in May.
And last but not least an absolute must for all guests of Taormina: The magnificently situated tiny and picturesque mountain village of Castelmola (529m/1,746ft high, 5km/3m. from the town, bus link) with the ruins of an old castle, excellent panoramic views and famous Sicilian almond wine to be tasted!