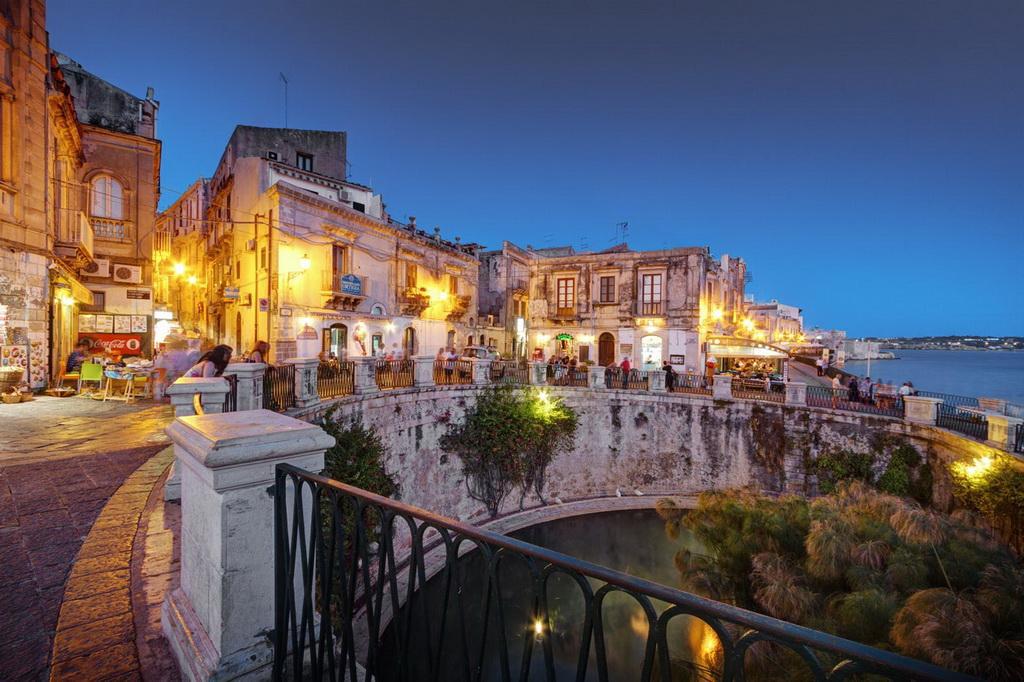 Looking for a hotel in Syracuse? Choose from more than 0 boutique hotels and charming hotels

Syracuse, provincial capital (126,000 inhabitants) and seat of an archbishop, lies on the south-east coast of Sicily, partly on an island off the coast. Due to its uncomparable wealth of monuments of antiquity, the city is one of the major tourist attractions of the island. In ancient times Syracuse was for centuries the largest and most powerful town not only in Sicily but anywhere in the Greek world, with over 500,000 inhabitants in its heyday and stretching up to the Castle Euryelos 8km to the northwest of the present city.

But Syracuse is much more than archaeological sites only. The typical charm of a seaside town, a picturesque fishing-harbour, Baroque façades and fountains in the medieval centre turn any sightseeing tour into a romantic walk across the centuries.

The island of Ortigia (ancient Ortygia) is the heart of the town, linked with the mainland by the bridge Ponte Nuovo and situated between the fishing-harbour “Porto Piccolo” and the large ferry port “Porto Grande”. With a fresh-water spring, ready access to the mainland and yet easy to defend, it was an ideal place in which to settle, and so in 734 B.C. the first Greek colonists from Corinth landed on Ortygia, drove the Siculans out and a flourishing community quickly developed. On Ortigia, the visitor will find an enchanting mix of ancient and medieval buildings: the Temple of Apollo (dating back to the 6th century B.C.), the Temple of Athena (the columns of which are incorporated in the Cathedral which is therefore called “Duomo Santa Maria delle Colonne” ), the famous “Spring of Arethusa” set among papyrus plants, Castello Maniace perched on the southern point of the island, Palazzo Bellomo… On the mainland the Achradina area of the town started to expand in the 6th century B.C., to be followed by Tyche in the north and Neapolis in the northwest.

The five sections into which ancient Syracuse was divided can still be found in the present-day town: Achradina, now Acradina, today’s business centre on the other side of the bridge, with remains of the ancient agora on the square “Foro Siracusano”. Tyche includes the Santa Lucia quarter, Sicily’s most splendid and modern Archaeological Museum in the garden of Villa Landolina, and the catacombs of San Giovanni - larger than those of Rome and testimony of the importance of the Christian era. Neapolis, now Neapoli, features the Parco Archeologico, including the Greek theatre, the Roman amphitheatre, the Latomia, the Altar of Hiero, etc. To the northwest of Neapoli and Tyche stretches the long, nowadays almost uninhabited but in ancient times densely populated plateau of Epipolai, bordered in the east by the sea, in the north and southwest by a ring of walls (in total 6km long) which meet at the massive castle Castello Eurialo (Euryelos) - the whole impressive defensive structure was built by the famous Tyrant Dionysios I against the Carthaginians’ attacks.

Syracuse enjoyed a period of great prosperity during the Tyrannies, which started in 485 B.C.
The magnificent Greek Theatre (Teatro Greco) was built and it was here that the tragedy "The Persians" by Aischylos was first performed in Sicily. With a diameter of 138m/453ft and originally 61 rows of seats hewn out of the rock and providing places for some 15,000 spectators, it is one of the largest theatres in the whole of the ancient Greek Empire. Except for the lowest rows of seats the auditorium has remained in its entirety.

At the end of the great wars with Athens, the Greeks were defeated in 413 B.C., 7,000 Athenians taken prisoner and set to work in the quarries, the “Latomia”, where they suffered awful pains and often died. The largest and best known of these quarries is the “Latomia del Paradiso”, named "The Ear of Dionysios" (l'Orecchio di Dionisio) because of its acoustics: according to legend the Tyrant could stand at one end and listen to even whispered conversations of the prisoners in these underground galleries. The long reign of Dionysios I (405-367 B.C.) marked a heyday of the town, his court was also the home of artists and philosophers such as Plato.

In 212 B.C. the Romans conquered Syracuse. The mathematician Archimedes was killed during the attack and the independence of Syracuse was now at an end, but it remained the capital of Sicily during the Roman period. Cicero described the city as ''so big, one might think it was made up of four giant towns put together…''. In 535 Syracuse became part of the Byzantine Empire for almost 350 years, but did not lose its importance either, it even replaced Constantinople as capital of Emperor Constance II for a couple of years.
The decline of the town was marked by the Saracens who took it in 878. The Arabs made Palermo the capital of Sicily, Syracuse was not even a provincial capital any more, as it had to hand this function over to Noto. During the following epochs Syracuse remained a place of little importance and its destruction was completed by the earthquakes of 1693 and 1757.
Only in the 20th century, when the town was found to be an ideal port for the Italian Empire and its development in North Africa, a revival of the city started and it gradually recovered. Industry, trade and not least tourism made its population once again considerably increase during the last few decades.
The hinterland of Syracuse offers further ancient sites set in particularly charming sceneries: not far from the western shores of the “Porto Grande” the Temple of Zeus stands on a hill overlooking the wild papyrus plants round the “Fonte Ciane”, the source of the small river Ciane.
Another point of attraction in the charming countryside, 30km to the northwest of the town, is the “Necrópoli di Pantálica” with 5,000 tombs, situated in the beautiful nature reserve of the Anapo valley.

And approx. 30km to the south-east from Syracuse you can visit the Baroque splendour of Noto (Unesco World Heritage Site) and its lovely unspoilt sandy beaches.
In opposite direction Catania (approx. 60km to the north, with International Airport Fontanarossa) as well as adjacent nature highlights “Etna Park” and “Cyclops Coast” are fascinating destinations for daily excursions.