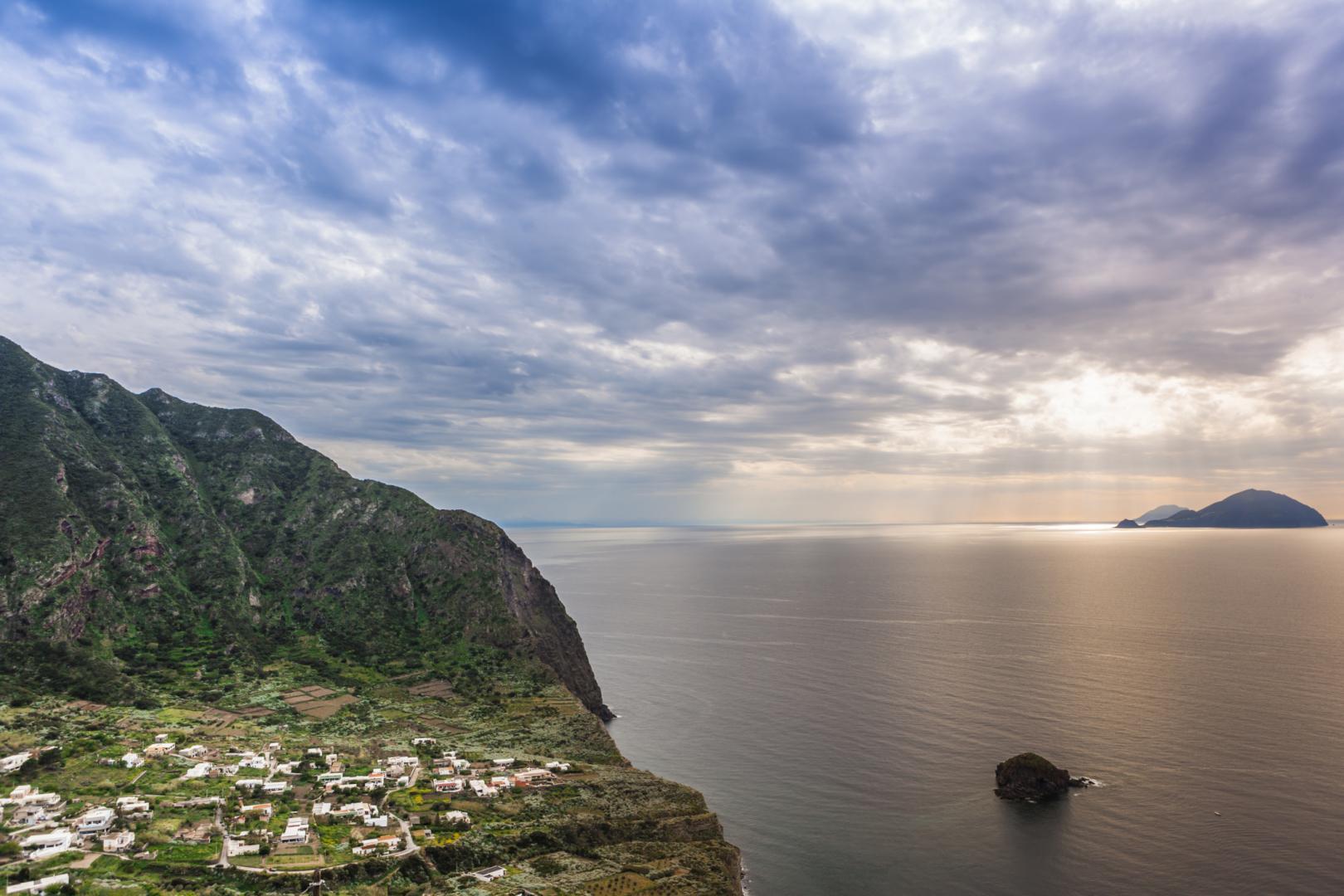 Looking for a hotel in Aeolian Islands? Choose from more than 0 boutique hotels and charming hotels

The Aeolian Island archipelago is made up of a group of seven islands (plus some more tiny not inhabitated ones), chunks of volcanic land poking out of the crystal-clear blue Mediterranean Sea off the north coast of Sicily. They can be easily reached by boat - there are numerous ferry or hydrofoil links to Milazzo, Cefalú, Palermo, Naples and from one island to another.
The jagged coastlines - sheer rocky cliffs with caves and tiny bays alternating with narrow, flat shore strips and small beaches (often accessible by boat only) - offer excellent opportunities for water sports, such as diving and snorkelling.

Thermal baths, trekking tours to the craters and magnificent nature add to the attractions of this unspoilt corner of paradise. All the seven islands are volcanic, all are beautiful, but nevertheless each one has its own particular landscape and character and, consequently, offers very different holiday options, ranging from oases of solitude and tranquillity to exclusive strongholds of the jet-set, full of life, action and excitement. It’s up to you to select the island that perfectly matches with your individual preferences! But no matter which one you choose, don’t miss tasting the local flavours, fresh fish and salted capers, juicy figs and famous Malvasia wine.

Greek mythology ascribes the Aeolian islands to the God Aeolus, son of Poseidon, whom Zeus made guardian of the winds. Settlers have been here since 4000 B.C., some as farmers, others trading valuable volcanic rocks like obsidian (a volcanic glass found in lava flows and used for arms and tools) and pumice stone across the ancient world. Pumice stone is still quarried on Lipari where its powder tinges the sea turquoise and the beach white: the amazing “Spiaggia Bianca” close to the fishing-village Canneto is unique - and Lípari’s most popular beach.
Lipari is the largest and most heavily populated of the Aeolian Islands (38 sq.km, 10,500 inh.). With good water sports and leisure facilities, plenty of restaurants and trendy fashion shops in Lipari town it is also the tourist centre of the archipelago.

The hilly island with some higher peaks - Monte Chirica rising up to 602m - is a trekking paradise with innumerable pathways through Mediterranean macchia, oleander, juniper and olive trees and along the terraced citrus orchards, vine and caper bushes.
In Lipari town narrow streets nestle between the two ports (Marina Grande for ferry boats and Marina Corta, vivacious point of encounter, for hydrofoils) and the “acropolis” on top of the rock, where the walls of a massive fortress (built in the Middle Ages against pirates’ attacks), baroque palaces and the Norman cathedral stand on the site of the ancient Greek acropolis (excavations). This upper town (pedestrian district) also features a very rewarding Archaeological Museum with important findings from all over the Mediterranean world and excellent views of the town and the sea below, sometimes even up to the Calabrian coastline.

According to mythological tales Hephaestus or Vulcan, blacksmith and God of Fire, had his forge inside the crater of the island Vulcano, hence the name of this island (450 inh. only on 21 sq.km) lying south of Lipari. The massive crater (391m) is still smoking, though for over 100 years now without eruptions. A forty-five minute hike across the brimstone-coloured summit region takes you up to the peak covered with fumaroles. Less exhausting is a bath in the sulphurous sea of the thermal spring area “Acqua di Bagno” near the tourist port of Levante. In this large natural pool you can also test the healthy effect of clay and enjoy the hot air jets nearby. Inside the sea also they provide a natural hydro-massage effect. Another highlight are the black beaches made of volcanic shingle, one in the north near the port, the other one at Gelso, in the south of the island.

Panarea lies 15km northeast of Lipari and is the smallest but also most glamorous island. In former times favourite hiding-place of pirates, nowadays destination of the jet-set, “the rich and the beautiful”, the picturesque island features a variety of attractions: sheer cliffs projecting out over tiny enchanting bays, white houses contrasting with violet bougainvillaea, a prehistoric village perched on top of rocky “Punta Milazzese”, fumaroles and hot springs reaching incredible temperatures… and, last but not least, elegant boutiques, first class hotels and pulsating night-life. The few remote shingle beaches can be reached by boat.

In the north, far away from the other islands, lies Stromboli, the best known island of the archipelago, although there are only a couple of small fishing-villages with black lava beaches. Approx. every 20min. the continuously active volcano emits huge bubbles of lava which explode with a thunderous noise and throw showers of stones (lapilli) which roll down to the sea along the “Sciara del Fuoco” slope - a spectacle that attracts backpack and jet-set tourists alike. The red glow can be seen from far away, to be best appreciated from the steamers that set off every evening from the island. Alternatively, the ascent (3 hours) to the 926m high summit near the crater is a fascinating experience.

The major part of Salina, the “green island” northwest of near Lípari and home of the Malvasia wine, is a designated national park. Unspoilt nature and the highest wood-covered peak of the Aeolian Islands, the volcano “Monte Fossa delle Felci” (felci = ferns, 960m) form a trekking paradise.

Filicudi and Alicudi are the most westerly islands, offering absolute tranquillity for those who seek peaceful holidays in contact with nature. Filicudi, popular among artists, features a prehistoric village and the splendid “Grotta Blu Marino”, which can definitely compete with Capri’s “Blue Grotto”. Smaller Alicudi with approx. 100 inhabitants only, one hotel and a couple of apartments, seems frozen in time – an oasis of solitude and crystal-clear blue water.