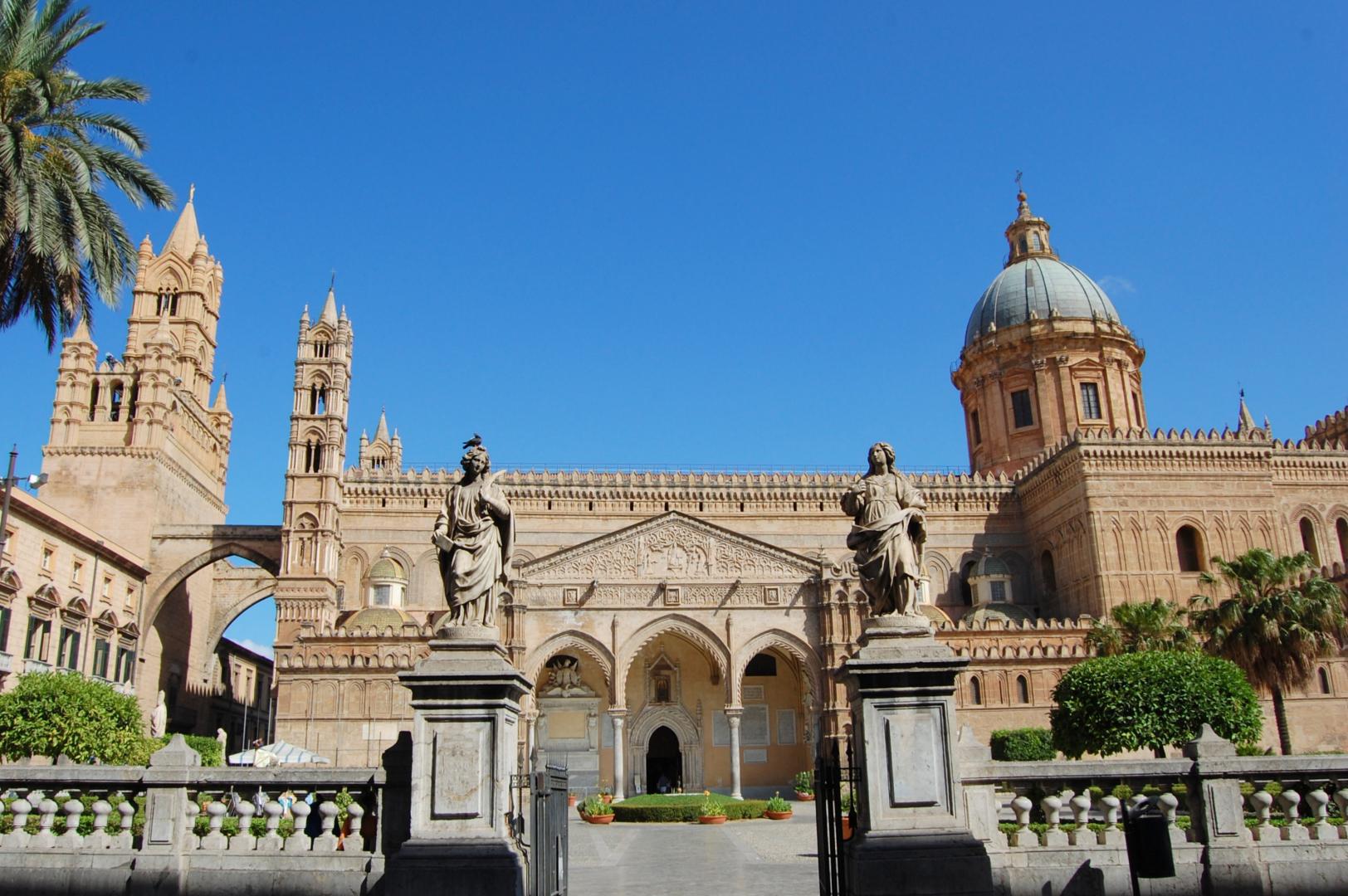 Looking for a hotel in Palermo? Choose from more than 0 boutique hotels and charming hotels

Palermo, located in the northwest of the island, is the capital of Sicily and the fifth largest city in Italy (officially approx. 730,000 inhabitants, but estimated –incl. the suburbs- over a million). In the middle of the Mediterranean Sea, Palermo has always been a crossroads of cultures between East and West: a strategic transit place, a privileged port for commerce and trade, a landing-place and melting-pot for people of various race, language and religion…

Founded in the 7th century B.C. by the Phoenicians, Palermo already gained some importance in the Roman era. But the heyday of the town started with the Arabs: under the name of Balerm it was made capital of the Emirs of Sicily and reports by travellers of the time placed it on a par with Baghdad and Cordoba for its many mosques, palaces and magnificent gardens. The population increased to 300,000, with Arabs, Jews, Greeks and negroes living peacefully together with the original native inhabitants.
San Giovanni degli Eremiti with its picturesque red cupolas and an exotic cloister garden, as well as the palace “La Zisa” with its amazing stalactite ceiling, are splendid testimonies of Arab architecture.

With the capture by the Normans in 1072 a new epoch began. In the 12th century above all Roger (Ruggero) II and William II built imposing churches and palaces, turning Palermo into an important cultural centre of whole Europe and ruling with religious tolerance over Christians, Moslems and Jews alike. Highly estimated Arab master-builders conferred an oriental touch to the Norman monuments constructed in this period. In 1194 the era of the Hohenstaufens followed and Frederick (Federico) II was crowned king in Palermo. As under the Normans, his court included various nationalities and religions. His death in 1250 marked the beginning decline of the town.

Of course, the hectic crowded metropolis Palermo, architectural sins, abandoned quarters, the social problems of the “Mezzogiorno” and the chaotic traffic do not immediately remind you of the romantic “Conca d’Oro”: the splendid “golden shell” round the Gulf framed by Monte Pellegrino and Capo Zafferano, described by Goethe as “the most beautiful promontory of the world”…
But substantial rehabilitation programmes ranging from townscape to culture are making progress and, anyway, Palermo is always worth a visit: the wealth of superb Medieval monuments preserved - differently from most other Sicilian towns, Palermo did not suffer earthquakes - , the overall Baroque appearance, the vitality which you will feel particularly in the heart of the historical centre “I Quattro Canti” (= the four edges, a large square with the famous “Pretoria Fountain”, from where a labyrinth of narrow streets extends to all directions) and above all in the Vucciria quarter with its busy and colourful markets stretching from Via Roma to the port “La Cala”.

The oldest and most attractive part of the city lies westwards from “I Quattro Canti” along Via Vittorio Emanuele. Highlights are the mighty Cathedral, built at the end of the 12th century and featuring the sarcophagi of Ruggero II and Federico II, and the Norman or Royal Palace (Palazzo Reale) originated from the Arab Al-Kasar Palace dating back to the 9th century. Its splendid chapel “Cappella Palatina” built by Roger II is an artistic masterpiece that mixes different styles: large gold mosaics, a Byzantine cupola with the icon of Christ Pantocrator and an Arab stalactite ceiling.

Even more famous, but somewhat macabre: the approx. 8,000 skeletons and mummified bodies of monks and notables buried in the catacombs of the Capuchins’ Monastery “Convento dei Cappuccini” between the 16th and 19th centuries.


In order to relax from the stressing city and sightseeing programmes you can choose between
- “Orto Botanico” – an oasis inside the city: a fantastic botanic garden with subtropical and exotic plants
- at 15 km distance: Mondello, Palermo’s elegant seaside resort with beautiful Liberty Style villas, sandy beaches and excellent fish restaurants
- at 13 km distance: 600m high “Monte Pellegrino”, nature reserve with pine woods and caves, ideal for summer outings

And the absolute MUST: Monreale, small town 8km southwestwards and towering above Palermo, featuring the most important monument of the Norman era.
The “Duomo Santa Maria la Nuova” was built 1172-1185 by William II who aimed to exceed Palermo’s Cathedral and, in fact, succeeded in creating unique splendour with a mix of Norman, Byzantine and Arab elements: Oriental decoration on the mighty 100m long basilica, Byzantine gold mosaics covering 6,300 squm, the icon of Christ Pantocrator dominating the choir and finally, the favourite tourist attraction: the cloister with its idyllic garden bordered by 228 twin columns supporting the Arab pointed arches. None of the slim beautifully ornamented columns equals the other.